In 1061 Stavoren was officially granted town privileges. For centuries it had been an important trading town. The little woman of Stavoren [Vrouwtje van Stavoren] is a legend about a wealthy merchant’s widow who is held responsible for the silting up of the harbour of Stavoren and, with that, the decline of the once so rich town. The harbour of Stavoren is now the base for sail cruise ships and hundreds of pleasure yachts. Since 1886 a ferry service has been operating between the Frisian town of Stavoren and the once hostile town of Enkhuizen in Holland.

Stavoren is referred to in Frisian as Starum and has almost 1,000 residents. Up to around 1600 it was called Staveren and then Stavoren and Staveren alternately. The town was established in around 900 AD along the banks of a stream. In 1040 it had already become a fortified town with its own coinage. In 1061 Stavoren was granted official town privileges by Count Egbert I with permission from the Roman Emperor Hendrik IV.

Hendrik IV (Goslar, 11 November 1050 – Liege, 7 August 1106) was king of Germany from 1056 to 1105. Since 1084 he was also emperor of the Holy Roman Empire. For Stavoren the granting of town privileges meant that it had its own laws, freedom from tolls throughout the entire Roman Empire and its own coat of arms. This coat of arms features a golden crown with crossed bishops’ crosiers which are reminders of the patrons, namely the archbishop
of Cologne and the bishop of Utrecht. 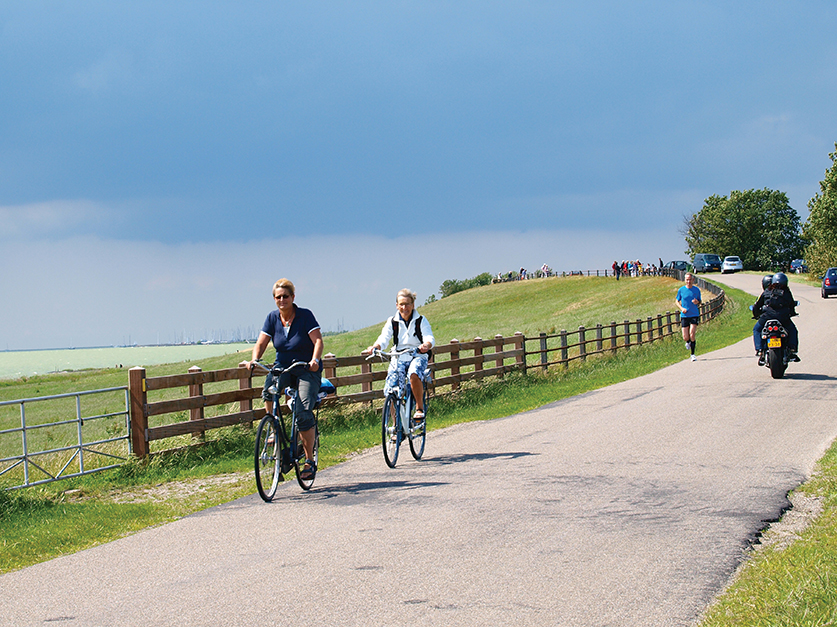 Stavoren was an important trading town. The main shipmasters and merchants maintained important trade relations with the countries around the Baltic Sea. In 1385 Stavoren became a Hanze member.
The master mariners of Stavoren enjoyed an old privilege when they passed the Sont in that they were given priority at the toll collection points, which speeded up their journeys considerably.
A hanze or hanza (‘group’, ‘multitude’ or ‘following’ from the Old High German word ‘Hansa’) was a partnership of traders and towns during the Middle Ages. They tried through cooperation to protect and expand their trade. From the twelfth century onwards partnerships between German merchants were established around the North and Baltic Seas. The Swedish island of Gotland was originally the centre for trade by merchants from Denmark, Lübeck and later Westphalia. From Gotland trading took place with England, Flanders and Novgorod, which already had a German settlement in 1190.

With a view to ensuring protection, originally small and later ever-larger partnerships were formed, of which some were referred to as guilds and others as Hanze, such as the Flemish Hanze of London and the Hanze of the XVII towns for trade with the Champagne annual fairs. However, the German Hanze was by far the most important and well-known and is often referred to simply as the Hanze. These transformed from a merchants’ association to a town alliance and, in their heyday, consisted of nearly 200 towns and cities, from London to Novgorod.

The port of Amsterdam played a key role in the Baltic Sea trade. Holland’s rapidly growing population was dependent for food supplies on grain imports from the Baltic States. Sea transport meant that the master mariners of Friesland were vitally important. In the wars between Holland and Friesland, Stavoren therefore usually chose the side of Holland. The distance from Stavoren to Holland (Enkhuizen) was and is not that great, being just 25 km.

At the end of the Middle Ages, the town fell into decline due to the Holland-Frisian wars which waged from 1345 to 1422. Handicrafts and trade suffered from a serious recession and this in turn led to the disappearance of financial means for maintaining the harbour and the dykes of Stavoren. The harbour silted up and Stavoren ceased playing a role of any significance. It is on this fact that the legend of the little woman of Stavoren [Vrouwtje van Stavoren] is based. Oud-Staveren was absorbed by the ever-advancing Zuider Zee.

In the 17th century, house building and harbour maintenance activities resumed thanks to the flourishing shipping routes to far-off countries by what were referred to as the ‘Friese Ommelandvaarders’. Unfortunately shipping activities from Stavoren ceased again in the 19th century. There was nothing left of the once so international harbour. 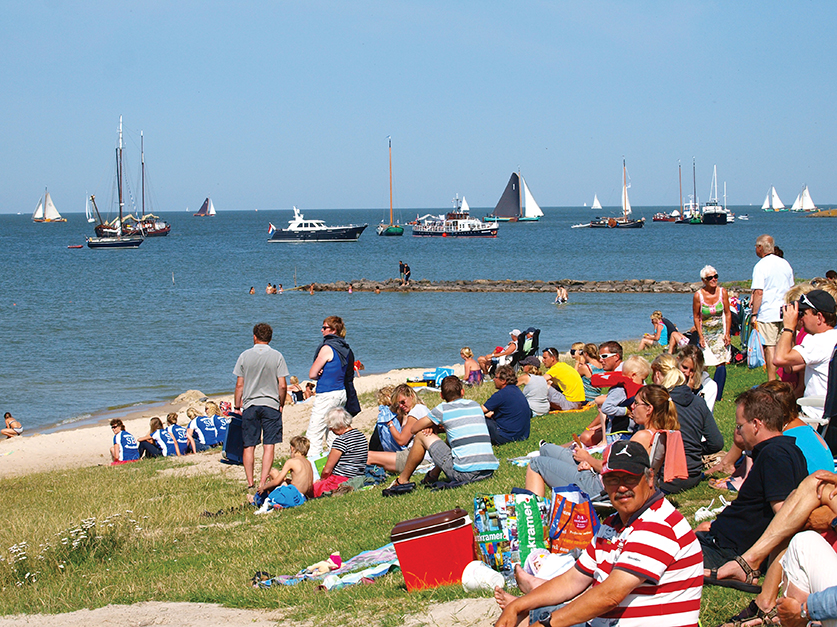 The harbour of Stavoren is now the basis of the Frisian Fleet [Friese Vloot], a cooperative shipping company with more than twenty traditional sailing ships, and the tall-ship Aphrodite, which was one of the most luxurious sailing cruise ships in the Netherlands. Except during the winter, thirty large sailing ships enter and depart from the harbour with an average of between 20 and 40 passengers on board. Many of the visitors are German students.

There has been a ferry service between Stavoren and Enkhuizen since 1886. Initially the focus was on freight transport – including railway carriages and other vehicles – and passengers. These days the ferry ‘Bep Glasius’ transports 45,000 tourists and 14,000 bicycles.

Nowadays there is plenty of room for pleasure craft in two large marinas, the inner and outer Marina Stavoren, in addition to the old harbours at the sluice and on the landward side of the town.

Landlubbers can stay the night at the ‘Vrouwtje van Stavoren’ hotel, an unusual and unique hotel with enormous wine casks as rooms.

In 1999 the discovery of a sandstone sarcophagus and a square construction on the bottom of the IJsselmeer in front of Stavoren harbour led people to suspect that the location had been found of the Odulfus monastery, one of the oldest monasteries in the Netherlands. Every year the Russian Orthodox monastery in Hemelum, on the Gaasterland boulder clay ridge, organises pilgrimages to this location.

The base of the Odulfus monastery is an ecclesiastical centre which was founded by Odulfus in 838 at the request of the bishop of Utrecht. Odulfus’ task was to convert the heathen Frisians to Christianity. The mission station was built in low fen woods to the west of old Stavoren, on the bottom of the current IJsselmeer. Since the construction of the IJsselmeer dam in 1932 the Zuider Zee was still a large swamp forest with brackish water streams.

In 1390 it was destroyed by the Dutch, after which the foundations disappeared into the Zuider Zee. For centuries fishermen told stories of how their nets were cut open by tombstones in the monastery graveyard.

Incidentally, even before the arrival of missionary Odulfus in Friesland, Bonifatius had already tried to covert the Frisian tribes but that ended badly when he was murdered in Dokkum in 754.

The Russian Orthodox monastery in Hemelum, on the on the Gaasterland boulder clay ridge, organises pilgrimages to the place at which the monastery and the Sint Odulfus abbey once stood. 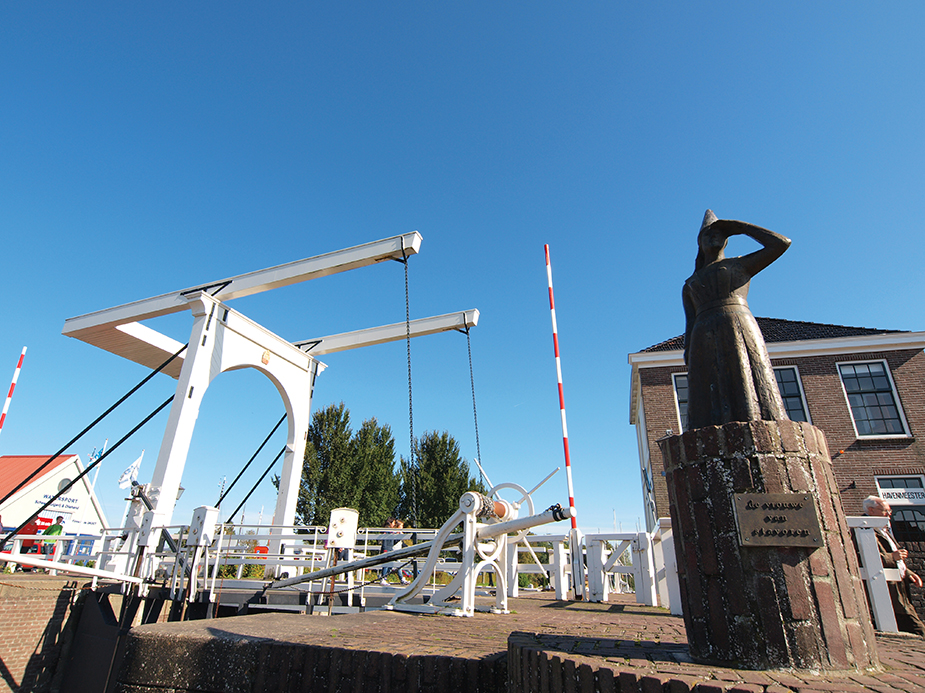